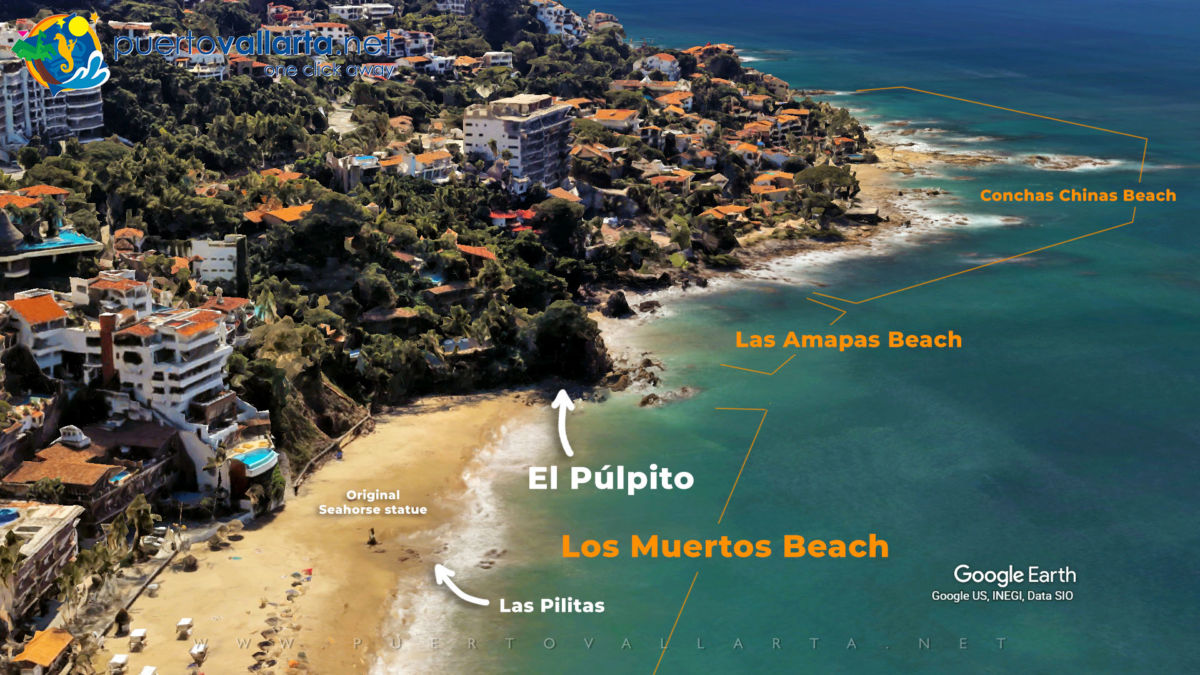 El Púlpito (The Pulpit) is a natural rock formation in the southern part of Los Muertos beach. Some locals mistakenly pronounce it “pulpito” (small octopus). This landmark is not only a great little trip, but it also has some interesting history.

El Púlpito and Las Pilitas (Pulpit and the Small baptismal fonts) are two separate rock formations found, one of them, Las Pilitas, on the southern end of the Romantic zone’s Los Muertos Beach, and the other, El Pulpito, is a rock outcropping that is actually the southern limit of Playa Los Muertos.

El Púlpito, a bit of history Las Pilitas is the group of rocks at the end of the beach where the bronze seahorse statue by Zamarripa, El Caballito, stands. This representation of a small boy riding on the back of a seahorse has become one of Puerto Vallarta’s symbols. El Púlpito is a rock promontory, fifty or sixty feet tall, that extends into the water and whose sheer face rises straight up out of the foam created by the waves that continually break along its base.

According to tradition, don Guadalupe Sánchez Torres, the founder of Puerto Vallarta, sat on the top of El Púlpito and cried after receiving the news that the port had been degraded from an international port to a coastal trade port (cabotage) on May 10th, 1924. The heartbroken don Guadalupe died three days later at the age of 93.

What is The Pulpit?

El Púlpito is a small 60-foot tall headland, mostly rock, now covered with a lot of local vegetation and trees so you can’t see much of the rock itself that gave it its name.

In older photographs, it’s clear why they called it that way. At the time Puerto Vallarta was (and still is) a very catholic town, so it is understandable that these geological formations would be baptized with a religious reference (see, I did it again ;-)). If you walk south along Los Muertos Beach, you’ll pass by the pier, the various restaurants and many hotels. Once you are at Las Pilitas, you’ll start seeing more details of The Pulpit and you may notice there are stairs going up into the vegetation.

In the photo below, you can see this path up the hill. You can walk up and cross over to Las Amapas beach that is just south of El Púlpito or you can go all the way up to the big boulder that is the summit of this little hill. Path leading up to El Pulpito from Los Muertos Beach

If you look at the older photo from 1956 (below), you’ll see that green trees and other vegetation have started to take over the hill and now covers the summit. You can no longer see much to the north when you are up on the summit, you can see south though and the view is nice, though a bit scary as there is no guardrail and it’s windy and the ground is not levelled. If you are a bit reckless (to say the least) you could get up on the crowning boulder (the pulpit itself)… [disclaimer, I do not recommend it!] I didn’t because it’s quite scary with the abrupt cliffs on all sides and no protection… and the wind… hmmm… time to go Mr. Coward!